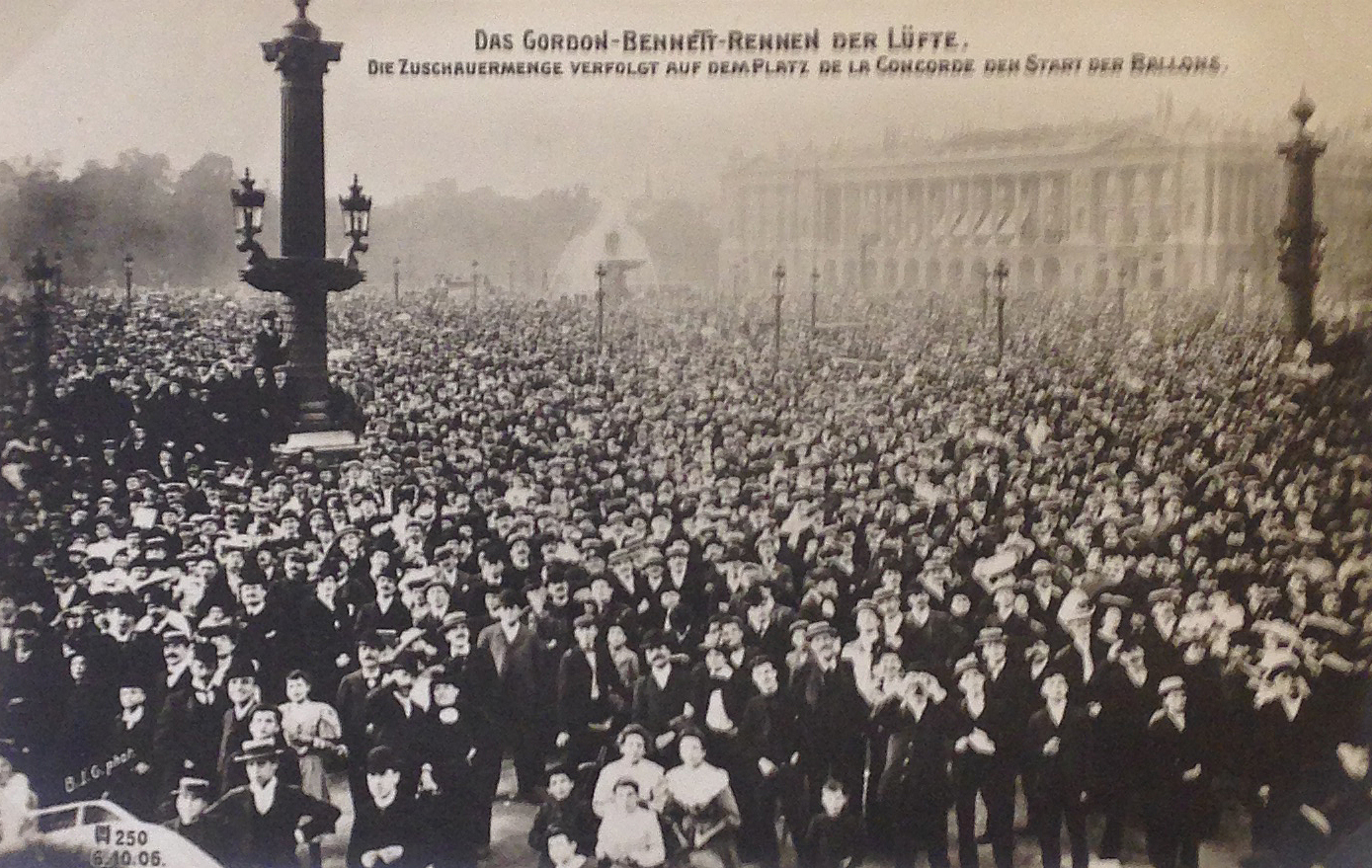 In Paris, public interest for the first Gordon-Bennett-Race was great. About 250.000 spectators may have been on the launch-field. Also among the aeronauts of the different countries, this new competition caught a lot of interest. Seven different nations entered balloons and with tension everybody waited for the launch of this new-developed competition. The only aeronauts in those days were balloon-pilots. Exactly 2 1/2 week before this launch, a Danish inventor named Jakob Ellehammer performed the first European fixed-wing-motor-flight, but with his home-made construction he covered only 42 meters at an altitude of 3 to 4 meters.

The order for take-off was defined by article 12 of the rules, by a drawing. At first the Italian balloon ELFE took off, the others followed in the drawn series within a period of a few minutes between them. Number 12 was the American Frank P. Lahm.

The most applause was gathered by Santos Dumont, flying for the USA. This eccentric and elegant pioneer of aviation had developed 14 aircraft in the years before, mostly one person mini-airships. . At this race, he flew with a 6 h.p. motor in the basket of the DEUX AMERIQUES. The flight ended painful for him. After covering 134 km, his jacket was caught in the propeller and his arm was hurt. He landed at Evreaux, and his balloon escaped, when he went out looking for a doctor in the night. This was the first and the last effort ever, to try to win this race by a motor-driven balloon. (The injuries may not have been too severe, for 1 1/2 month later, on November 12th, Alberto Santos-Dumont managed to make some good flights in Brazil with his self-developed biplane. (For his best performance he flew 70 meters in 21 seconds.)

Let’s go back to the race: The wind came from southeast and drove the balloons to the channel, urging the pilots to make the decision to land, or to risk the dangerous jump across the water in the hope, to reach the English coast. 16 balloons have launched, 7 left the continent and landed safe in England.

The first Gordon-Bennett-winners became the Americans Lt. Frank P.Lahm with his co-pilot Major Hersey in the balloon UNITED STATES, a coal-gas balloon of 2080 cu m. They landed after 22 hours and 15 minutes in Fyling-Dales, Yorkshire-county in north-England, directly in front of the North-Sea-coast. The balloon, that took off first, ELFE (1850 cu m), with Alfred Vonwiller and Lt. Ettore Cianetti came in second with only 54 kilometres back and a landing close to the town named Hull.

Among the others, Mr. Charles Rolls ("Rolls Royce") created excitement. He got lost. After he landed south of Hull in the night, he found no open telegraph-office, to sent his landing-report, and in his hurry, to travel back to London, he and his co-pilot totally forgot to report. Something else happened already in those times: A very angry English farmer sent a telegram to the FAI, complaining that the trace of a trail-rope of an unidentifiable balloon had spoiled his meadow. But in general, comments from the citizens were positive: The Lord of Flyingdale, on which properties the winner landed, commented: "An earthquake will not raise more attention than a landing of a balloon".

Let’s now have a look to the winner of this first competition: Frank P. Lahm, Lieutenant in the signal-corps of the US-army, born November 17th 1877 in Mansfield (Ohio). Lahm joined Westpoint military academy in June 1897, and was promoted Lieutenant of cavalry in the year 1901. He took part in the Philippine-war for two years and became teacher at Westpoint in 1903. From there, for further education he was commanded to attend the riding-school of Saumur (France) and later ordered to develop an air-force for the United States. Until the Gordon-Bennett-Race 1906 he had only done 14 flights in a balloon.

After his victory he was interviewed by the reporters of the New-York-Herald, and here is the report, that was printed in this paper on October 3rd 1906:

(this is the place, where the original interview Lahm/New York Herald should be shown)

Notes from the log-book of the UNITED STATES:

In the United States there was much cheering about this victory, especially among the members of the American aero club. But now the representatives of this club had to face big problems: they had to host the next race. Their organization was quite young, and only two pilots in the whole country held the required international licences and had some experience. (Santos Dumont had flown for the USA, but he was a Brazilian citizen). How could this end up well?