‘Shoot It Down!’: The Tragic Tale Of Two American Balloonists Over Belarus

Original article from by Alena Shalayeva and Tony Wesolowsky, RadioFreeEurope published November 29, 2020. Copied with permission of the author. 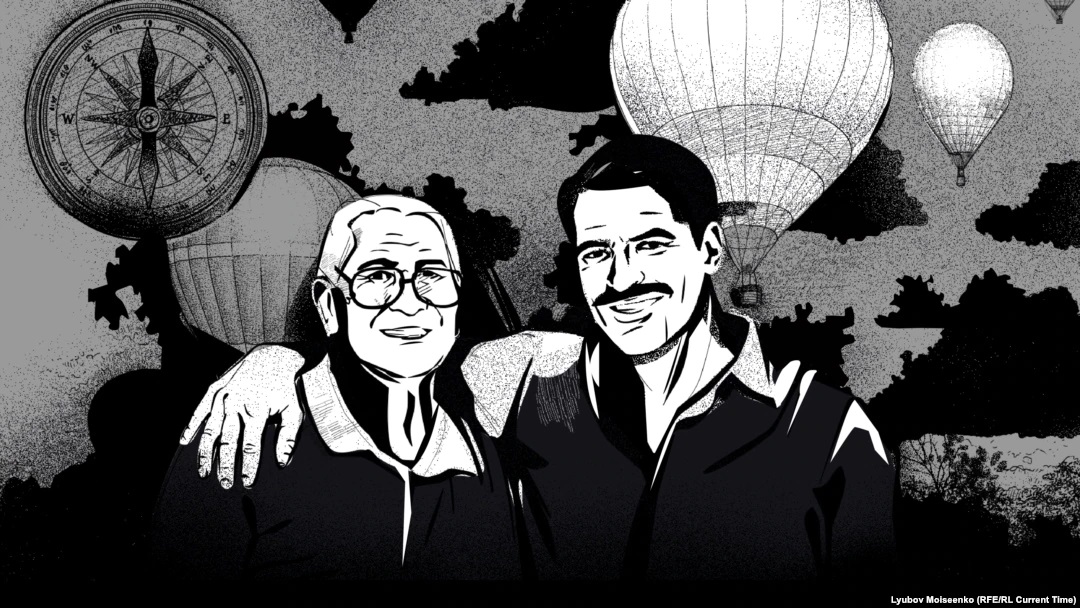 It was the fourth day of the 1995 Gordon Bennett Cup, one of the world’s most prestigious balloon races and one of the most challenging as well.

Alan Fraenckel, 55, and John Stuart-Jervis, 68, were over the skies of Poland before dawn on September 12, 1995, heading toward Belarus with a real chance of winning.

The two Americans, residents of the U.S. Virgin Islands, were excited by the prospect of flying over the former Soviet republic, which was mostly off limits until gaining independence following the breakup of the Soviet Union in 1991.

Race organizers said Belarusian authorities had been informed about the Americans’ plans and had cleared them, along with four other American racers who were also planning to fly over Belarus in two other balloons.

However, as Fraenckel, an airline pilot by profession, and his copilot, Stuart-Jervis, headed into Belarus, they were tracked for more than two hours by Belarusian air-defense system before a military helicopter sprayed the balloon – which was filled with some 900 cubic meters of highly flammable hydrogen — with machine-gun fire, sending it crashing into a forest in western Belarus and killing both men.

Belarusian authorities said the balloon – registered in Germany as D-Caribbean — had strayed too close to a military airbase and missile-launch site and had failed to respond to radio calls or warning shots.

The International Aeronautical Federation would later say that Belarusian authorities had known about the race since March, had authorized the balloon of Stuart-Jervis and Fraenkel as well as those of J. Michael Wallace, Kevin Brielmann, David Levin, and Mark Sullivan. Moreover, race officials said the pilots had provided specific flight plans during the race.

For their part, Belarusian officials say they initially requested more documentation from race officials that arrived only as the race started.

Belarus did express regret over the tragedy, but stopped short of issuing a formal apology. Washington slammed Minsk for dragging its feet on notifying them of the incident and was further incensed when Belarusian authorities issued fines of $30 to the other balloonists — who had been forced to land — for not having visas.

“This is a farce,” said State Department spokesman Nicholas Burns at the time. “We expected an apology from the Belarusian government and instead we got a bill.”

The incident came a year after Alyaksandr Lukashenka — a former collective farm manager who cast himself as a crime and corruption buster — had been elected president of Belarus, a post he would hold for decades as he erected an authoritarian system much like the former Soviet one, crushing all opponents who stood in his way. 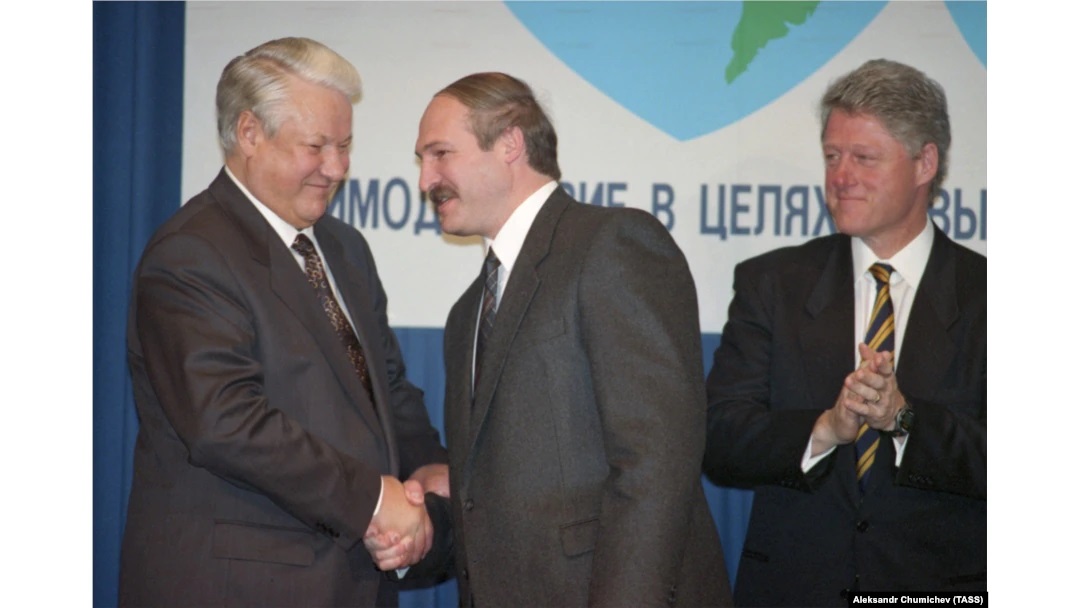 Belarusian President Alyaksandr Lukashenka (center) with his American and Russian counterparts, Bill Clinton (right) and Boris Yeltsin, shortly after he came to power in 1994.

Hours before tragedy struck, Fraenckel and Stuart-Jervis were in radio contact with Wallace and Brielmann, who were only 20 kilometers away after more than 60 hours of flight.

“We have 12 bags [of ballast] left,” said Fraenckel, “and all our water. We’re going to do a fourth night.”

“If you can’t find your crew,” answered Wallace, a close friend of Fraenckel’s, “you could still land now. My guys are right under you.” Half joking, half serious, Wallace was aware that the other balloon stood a good chance of winning if it stayed aloft.

“I don’t think so,” chuckled Fraenckel.

The Gordon Bennett Balloon Race, named for the millionaire sportsman and owner of the New York Herald newspaper, is the premier event among balloon racers. In principle, it is a simple event — the winner is the balloon that flies the furthest from the starting point without landing.

But it is literally a killer, and dozens have fallen victim to it over the years. In the 1923 race, which was held in Europe, five balloonists were killed by lightning, and a half dozen more were seriously injured in storms. 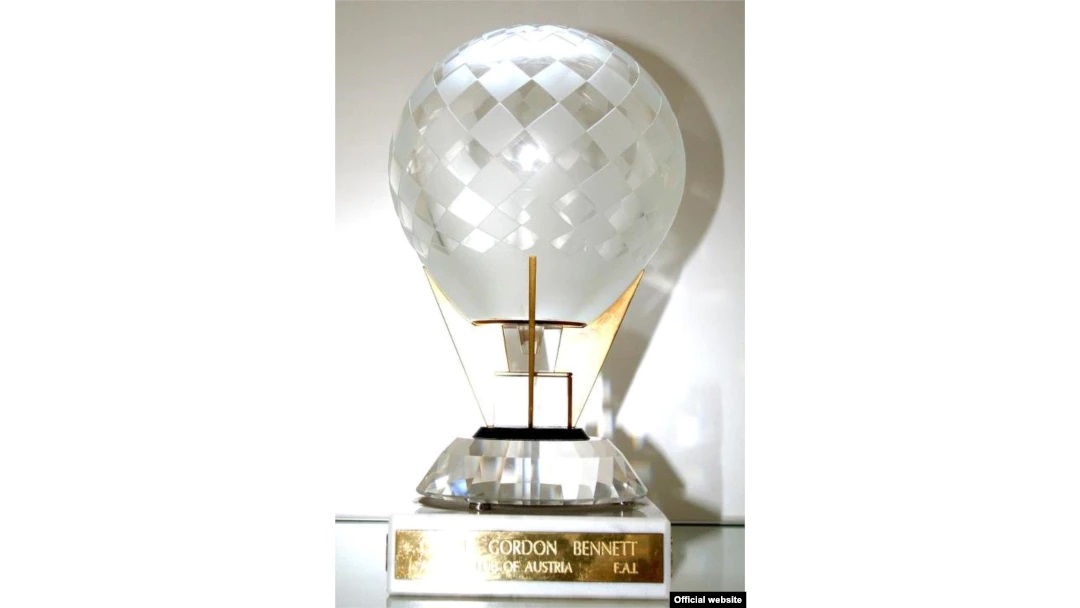 The 1995 Gordon Bennett Cup, which Stuart-Jervis and Fraenckel had high hopes of winning before tragedy struck.

In 1995, the year of the Belarus tragedy, German balloonists Wilhelm Elmers and Bernd Landsmann set the race record for longest flight time, remaining aloft for more than 92 hours before touching down in Latvia on September 13.

That year, the race began on September 9 when 17 balloons lifted away from the starting point at Wil, Switzerland. By the evening of September 10, six of the balloons had landed in various locations in Western Europe, ending their bid for the trophy.

Witness To A Tragedy

As the Americans were traversing the skies of western Belarus, Vasil Zdanyuk, editor in chief of the Belarusian newspaper Svododnye Novosti and a correspondent for the Moscow-based Military Journal, sat down for an interview in his Minsk office with Belarusian Air Force commander Valery Kastenka.

“About 20 minutes into our interview, the operative on duty at the Air Defense Forces called and said: ‘We have the following situation: an unidentified object has appeared not far from our facilities, not far from an airfield.’ There is a military airbase nearby,” recounted Zdanyuk to Current Time, the Russian-language network led by RFE/RL in cooperation with VOA.

In fact, according to Zdanyuk, Kastenka was at that moment explaining the nuisance that low-flying probes — mostly weather balloons — posed for Belarus’s air defenses.

“Kastenka recounted how one of these balloons flew right over Minsk and almost caused a panic, although there was no danger,” he recalled. “And he says, ‘See how lucky you are. We are discussing it, and there is a balloon in the air.'” 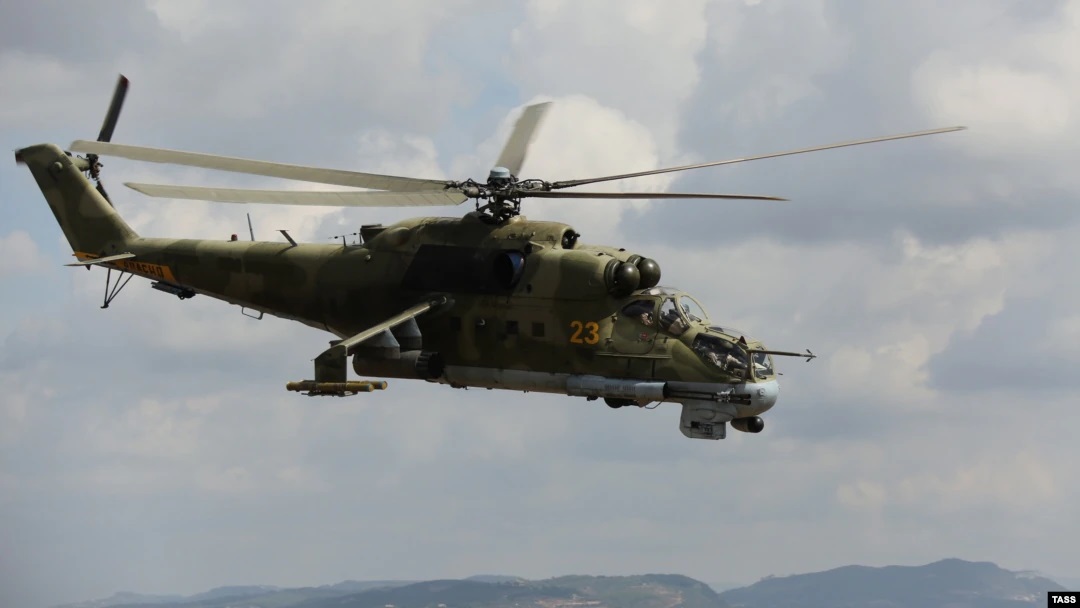 The gunship that shot down the balloon was a Russian-made Mil Mi-24 combat helicopter. (file photo)

Kastenka ordered a military helicopter – a Mil Mi-24 — up in the air to check out the object.

As the military gunship got closer to D-Caribbean, Kastenka flicked on the speakerphone, letting Zdanyuk hear the conversation between Kastenka and the helicopter commander.

“After five more minutes, when the helicopter had flown around [the balloon], the operative asked: ‘What should we do with it?’ ‘What should we do? Let’s shoot it down,’ [Kastenka] added a few tough expletives. And I’m sitting there, doing the interview, and all of this is being recorded,” Zdanyuk said.

Zdanyuk said he could even hear the fusillade of machine-gun fire as Kastenka allegedly boasted to him: “You see, this is how we work. This is how we serve.”

The bodies of Fraenckel and Stuart-Jervis were later found in a forest near the town of Byaroza, after having fallen some 2,000 meters. 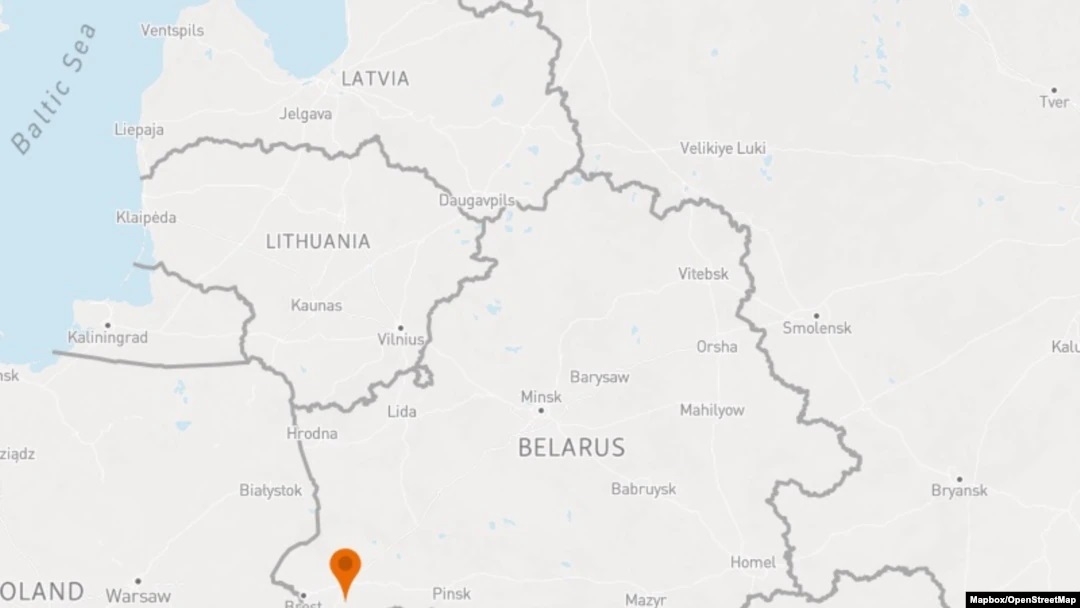 The balloon Stuart-Jervis and Fraenkel were traveling in was shot down near the town of Byaroza in western Belarus.

Zdanyuk told Current Time in his December 2019 interview that he was confident Kastenka did not know the balloon was manned, speculating things may not have taken a tragic turn had Kastenka waited some 20 minutes until the other two American balloons appeared.

“Then he would have been more cautious: Why are they flying one after another,” Zdanyuk said. “And it would have become clear that a world ballooning championship from Switzerland was taking place.”

Of the two remaining U.S. balloons, the first to land was the N69RW, navigated by David Levin and Mark Sullivan.

“At first we stuck to a more northern route: we headed to a small part of Russia near Latvia and climbed over the Baltic. But when in the morning the balloon began to rise due to solar energy, we turned east to Belarus,” Sullivan later recounted. 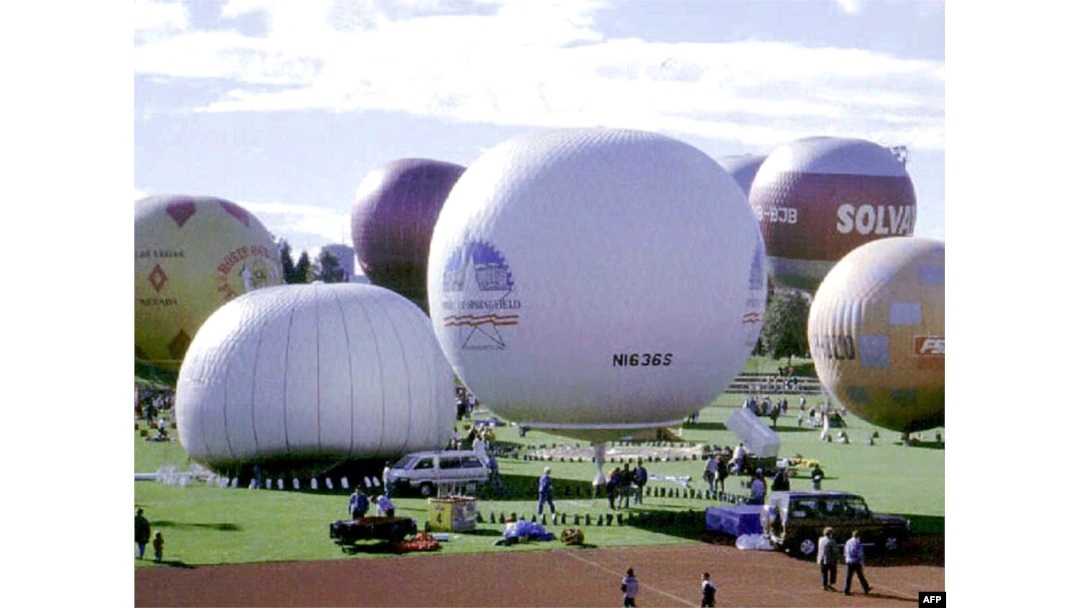 Competitors line up a the start of the Gordon Bennett Cup in September 1995. Stuart-Jervis and Fraenkel’s balloon can be seen in the foreground.

Two hours before crossing the border, the balloonists tried to contact the Minsk air traffic control center. Their signal was confirmed, but they were answered in Russian, although English is normally used in international aviation communication.

The Belarusian government expressed regret for the incident but stopped short of offering a formal apology.

“Whatever the circumstances may have been, and whether or not the balloon was able to answer radio calls from the Belarus military, the shooting was absolutely indefensible,” he said. “Moreover, the Belarus government took 24 hours even to notify us of the incident. We are strongly protesting and demanding a full investigation by the Belarus government.”

The Interstate Aviation Committee of the Commonwealth of Independent States (CIS) — a loose grouping of former Soviet republics — investigated the incident with representatives of the U.S. National Transportation Safety Board (NTSB) and German aviation authorities also participating. 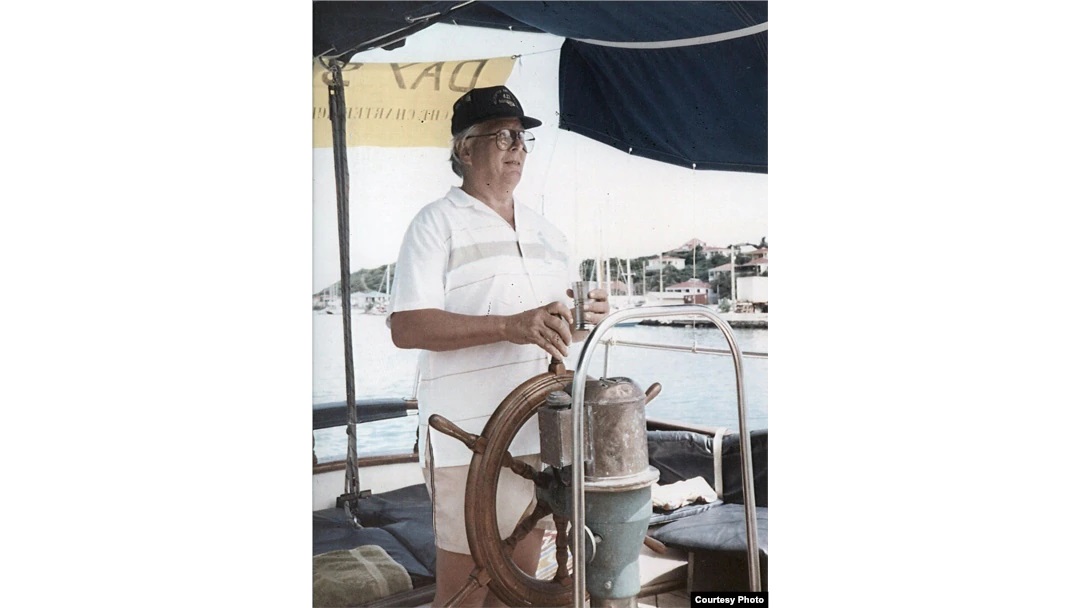 In its final report, the committee concluded the causes of the shooting were: “Unauthorized flight into the airspace of [Belarus] by an unidentified balloon, with no radio communication [between the balloon crew and Belarus air traffic control (ATC)0],” and “errors by [Belarus] anti-aircraft defense elements in the identification and classification of the airship that violated [Belarus] airspace.”

Yury Sivakou, head of the Belarusian Security Council at the time of the incident, defended Belarus’s actions, telling Current Time in 2019 that any country under similar circumstances would have done the same.

“If an unidentified aircraft appears in foreign space — in any country — first they negotiate with it, then they raise the appropriate air defense forces, which either enter into communication or force it to land,” said Sivakou, now blacklisted by the EU for his alleged role in the abduction and killings of opposition leaders in Belarus in the 1990s. “Even if radio communication does not work, there is a whole range of various [actions]: flapping wings and so on to force it to land, or indicating manually, ‘Follow me.’ In this case, the balloon did not react at all, and that was very strange at the time.”

According to Sivakou, the military assumed there could be “anything” in the balloon gondola. They came to this conclusion because there was an air base and other military facilities nearby.

He dismissed reports that the crew involved in the downing had been awarded medals as “speculation and rumors.”

“People died – it’s a tragedy,” he said. “Who awards anything in such cases? This was no act of aggression. It was just an accident.”

While families of the victims have never received a formal apology or any compensation from Minsk, many ordinary Belarusians expressed sorrow and shame for how its government had acted.

Alyaksandr Artsyukhovich, studying at a U.S. university at the time, expressed hope the shooting would be the last such tragedy.

“My country is a mess now,” he wrote at the time. “Millions of people feel themselves manipulated and frustrated. I only hope that the [recent] incident [will] be the only tragedy. Only removal of the artificial barriers built by the West to our integration into the world’s community can normalize things in Belarus.”

On the first anniversary of the tragedy, activists in Belarus placed a simple stone at the crash site with a cross, the date of the accident, and the phrase in Belarusian: “Forgive us.”