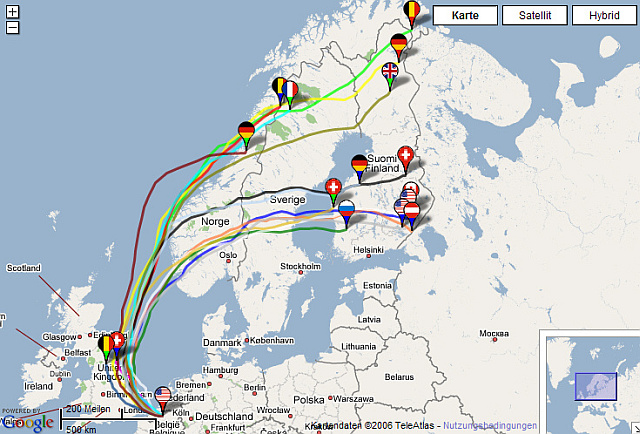 Since the Belgians Bob Berben and Benoît Siméons had won the 2005 race out of Albuquerque the 100th Anniversary of the Gordon Bennett was to take off from Belgium.
It was the 50th edition of the Coupe Aéronautique Gordon Bennett.

Waasmunster was the hosting town.

All pilots were welcomed at the check-in in the beautiful Waasmunster Castle.

The General Briefing was on Friday September 8. The weather in Belgium was most beautiful: stable, dry, blue sky, warm, light winds, and stable forecast for the next days.
The forecast for wind directions for the next days varied from South-Easterly winds in the beginning of the period to South-Westerly winds after two days, even to Westerly winds after three days.
However overall the winds headed straight to the North Sea. It was therefore decided that take-off would not be early in the night of Saturday September 9, but two hours before sunset. This would enable pilots not feeling very secure of themselves, of their balloon or of their equipment, to land on Belgian territory before starting a 24 hr journey over the North Sea.

Early Saturday morning the filling of the first balloons started. The weather was brilliant though a little windy, so all balloons were tight to their retrieve vehicles. The balloons stood proudly, awaiting the great adventure….Lots of spectators came to watch the start of this historical race. Gas balloons are rarely seen in Belgium.

The winds softened just as the balloons were launched, which allowed a take-off from the podium.
Who wouldn’t get goose pimples seeing a wicker basket hanging under a balloon with two brave men (two women!) on board, taking off for such an adventurous journey? Add each teams national anthem and you can imagine the enthusiasm of the pilots, the officials, the public.
Sixteen times a balloon took off into a magnificent sunset, sixteen times the national anthem was heard.
Sixteen. Not seventeen?
The balloon of Andy Cayton & Dan Suskin, team USA3, was leaking…. Andy and Dan’s dream fell apart. This balloon could not fly. It was over for them, over before it started.

The balloons headed towards the Belgian coastline. On the Gordon Bennett website one could follow each individual balloons track on the map. Two hours later it was clear that no balloon had landed before the coast. All balloons were now crossing the Channel, through the night.

By flying low England was reachable. The Belgian team of Luc Van Geyte & Rudy Paenen and the Swiss team of Christian Stoll & Walter Mattenberger landed on Sunday in the vicinity of Scarborough, the landing site of the very first Gordon Bennett winner, in 1906, out of Paris.

Fourteen balloons start the long journey over the North Sea.
Flying high South Scandinavia is within reach. There the weather is foreseen to remain bright.
Yet South Scandinavia is not the mathematical longest possible distance under the foreseen winds…
But…. Cloudy, windy, rainy weather is forecasted above 62°N.
And the mountain rim all through Eastern Norway is high and rough…

On Monday morning, September 11, eight teams appear to have chosen to head for South Scandinavia.

Another team is somehow in problems: The Germans Heinrich Brachtendorf & Karl-Heinz Huthmacher don’t have enough ballast left to climb and obtain a more easterly heading. They fear they might not be able to reach land. Search-and-Rescue remains standby, but the brave men keep struggling and in the late afternoon they land safely… on land.

Five balloons have apparently chosen to try to reach the very longest possible distance, in spite of the bad weather.
But the Belgian team of Benoît Siméons & Bob Berben and the French team of Vincent Leÿs & Sébastien Rolland encounter severe weather-induced problems and make very difficult landings in the late afternoon of Monday September 11 in rough mountains.
It will take the Belgians three days of Scandinavian wilderness adventure before reaching civilisation.

Five balloons will fly on and land close the Russian border.
Yet the Canadians Danielle Francoeur & Leo Burman, the Swiss Kurt Frieden & Stefan Zeberli and the Americans Phillip Macnutt & Richard Abruzzo will, later on, be scored a zero result for having committed Air Traffic Control infringements.
The airspace is getting ever more dense. Air Traffic Regulations are of the highest priority in these races; respect for it is mandatory.
The Americans Barbara Fricke & Peter Cuneo will land before sunset. The Austrians Gerald Stürzlinger & Johann Fürstner will fly on a fourth night and land upon daybreak of Wednesday September 13.

All these Southern teams flew long hours, but their track could not lead to the only Gordon Bennett goal: the longest distance.

Let’s go back to Tuesday September 12. David Hempleman-Adams & Jonathan Mason are landing around noon.
They and the two other Northern teams still on the go have beaten the Gordon Bennett European maximum distance set in 1912 by the French Bienaimé and Rumpelmayer (they flew from Stuttgart to Moscow).
Now comes the tough battle between the very experienced Germans Wilhelm Eimers & Ullrich Seel and the far less experienced (though with a bright Gordon Bennett Result record) Belgians Philippe De Cock & Ronny Van Havere.
The teacher versus his pupil?

(Philippe De Cock has, a month before, won the Belgian Hot Air Championship…)

The battle is nail-biting. De Cock is taking the lead, Eimers is following. Would this be to Eimers’ advantage?
However one can, on the website track, see that Eimers is heading too easterly: he has to stop before the Russian border since the Russian airspace was not open to the Gordon Bennett race. What a pity the Russian border is so westward just on this latitude…
Philippe De Cock & Ronny Van Havere fly on for half an hour more, enter Norwegian territory again and land on…. The North Cape! They have flown 2449.6 km ! of which more than half over the sea!

This 100th Anniversary of the Coupe Aéronautique Gordon Bennett brought truly brilliant flights to each of the teams: such long flights, crossing the Channel, crossing the North Sea, flying over the overwhelming nature of Scandinavia !
The Closing Ceremony was held in the extraordinary setting of the Brussels’ Aviation Museum.

It was a historical flight for sure!

Belgium won the Gordon Bennett 2005 and 2006. All eyes will remain focused on the Belgian teams, wondering if they will bring the Coupe to Belgium in 2007….?... 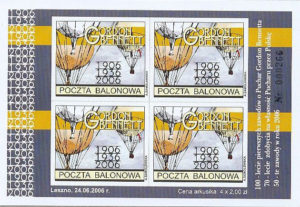 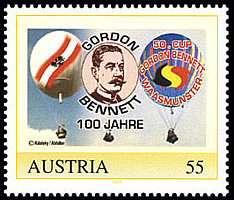