Lausanne, Switzerland, 1 September 2015 – Swiss Team SUI 01 Kurt Frieden and Pascal Witprächtiger won the 59th Coupe Aéronautique Gordon Bennett, the FAI World Long Distance Gas Balloon Championship. Having left Pau, France, in the evening of the 28 August, they landed near Jaczno, Poland, after 68h 20min and 2080.80 km from the take-off point at about 8:30am on 1 September. Last year’s winners Team GER 01 Wilhelm Eimers and Matthias Zenge reached the second place with 2071.61 km, and Nicolas Tièche and Laurent Sciboz from Switzerland third with 2067.76 km.

In total 17 teams of eight nations took part in this oldest race of aviation, happening in Pau, France, on the northern edge of the Pyrennees. The competition has been declared open by FAI Executive Board Member Gillian Rayner during the Opening Ceremony on the evening of 27 August at the beautiful mansion La villa Sainte Basil. The next day, flawless weather conditions allowed for an imposing launch into a clear, moonlit sky at the horse racing track in Pau. The first team launched at 22:57 local time (CEST). About 5.000 spectators on-site supported the teams, cheered when their National Anthems were performed live and contributed to the emotional departure of the world’s best gas balloon pilots. After less than 1 hour, the last competitors took off into the French sky at 23:55 CEST.

As foreseen, the initial heading pointed to the North West and within 90 minutes the first teams reached the shores of Biscaya (Gulf de Gascogne) and went out to the sea. Almost all pilots decided to fly at low altitudes of 500m or below for the first five hours. While they were enjoying a beautiful sunrise over the mainland of France, they were all climbing to reach an altitude of 3000 metres and above. As forecast, the airspace of Paris divided the competitors into two groups. One group headed towards Belgium and Netherlands, the more Southern group continued their flight direction towards Luxembourg and Frankfurt.

During the fourth night the race had been decided: The teams GER 01 (Eimers/Zenge), POL 01 (Zapart/Dawidziuk) and both remaining Swiss teams, SUI 01 (Frieden/Witprächtiger) and SUI 02 (Tièche/Sciboz), were the last in the skies of Europe. Today’s morning it has been confirmed: SUI 01 flew 9 km more than Team GER 01, with a distance of 2080,80 km being the new Champions of the 59th Coupe Aéronautique Gordon Bennett. 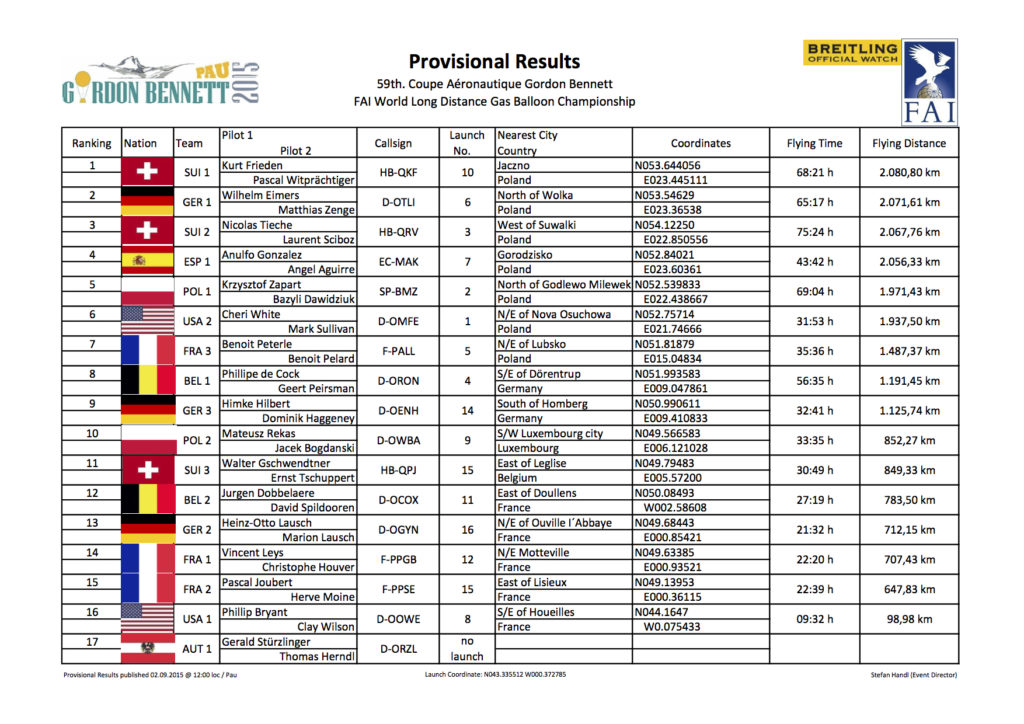 The flights achieved by all the teams can be seen on the on the competition website thanks to live tracking. The competition will be closed on the 4 September at the horse racing track in Pau with the Prize Giving Ceremony and the official Closing Ceremony. FAI President Dr. John Grubbström will be on site to congratulate the pilots for their outstanding performances.

Additionally, a rare coincidence happened. Two FAI World Championships crossed in Châteauroux- Déols, when the balloon of GER 03 (Hilbert/Haggeney) crossed the airspace of the airfield where the 28th FAI World Aerobatics Championships where held. The Team flew over when the prize giving ceremony took place and was saluted with loud applause to welcome them.

The Coupe Aéronautique Gordon Bennett, the FAI World Long Distance Gas Balloon Championship, is the oldest and most prestigious event in aviation and the ultimate challenge for the pilots. It is a story full of adventure, skill, courage, survival and luck. The goal is simple: to fly the furthest non-stop distance from the launch site.

The international competition was initiated by adventurer and newspaper tycoon James Gordon Bennett Jr. in 1906, when 16 balloons launched from the Tuileries Gardens in Paris, France. Little did the crowd of 200,000 spectators know that this race was to continue throughout the 20th century. The team which is the glorious winner will bring the competition to their country. This means, thanks to Team SUI 01 the 61st Coupe Aéronautique Gordon Bennett will be hosted in Switzerland in 2017. The 60th edition will be held in Gladbeck, Germany, as the race was won last year by a German team.

The Fédération Aéronautique Internationale (FAI), the World Air Sports Federation, is the world governing body for air sports and for certifying world aviation and space records. The FAI was founded in 1905 and is a non-governmental and non-profit-making organisation recognised by the International Olympic Committee (IOC).