What a day! Yesterday and last night was very exciting. We had the pleasure to watch how the different strategies unveiling. During the night, we were on duty with 2 people at all times, occasional 4 people were monitoring the situation. Additionally, all teams flying had their support teams in full swing. All do their utmost to support teams on their challenging flights. 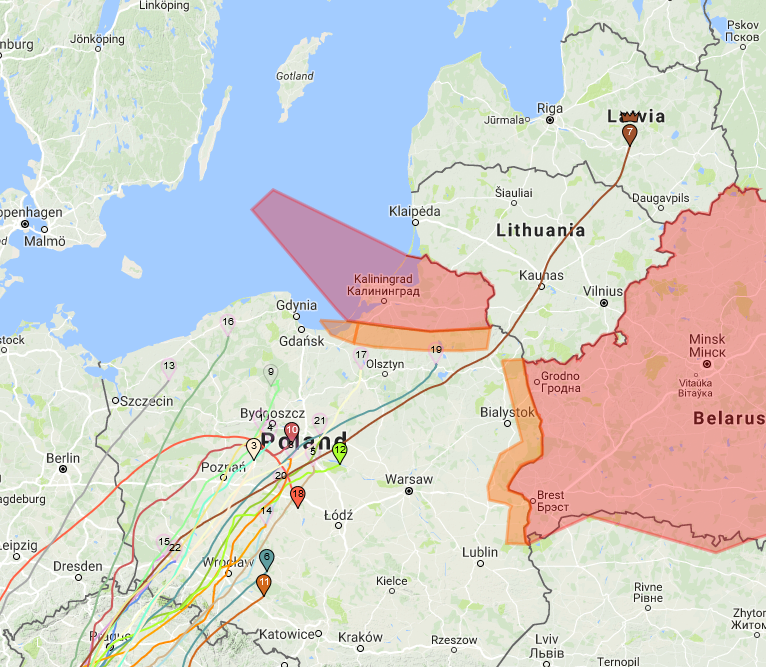 As expected the two teams (SUI1 and GER3) with the most western track made their way up north in occasionally challenging weather conditions which even involved snow fall. Their track looked very promising to enter the Baltic Sea, passing the Kaliningrad airspace on the west, continuing to the island of Gotland and heading for Finland. However, the weather in Sweden would affect with the possibility of heavy rain and even thunderstorms. GER3 decided to terminate the flight.

As written in their blog, the team SUI1 changed their strategy. After a maximum altitude of above 4’000m AMSL they flew lower and entered a current to the East, even South East. We would expect that they will soon climb again and join the north-easterly heading of ESP1 and GER1

The majority of the balloons landed before the night in Northern Poland since the huge blocking air space did not allow a circumnavigation.

Despite trying hard and a very impressive and promising strategy, team SUI02 had to terminate their flight very close to the maximum distance possible within Poland as they just slightly missed the gap to Lithuania. At this moment they stand on second best position with a distance of more than 1’300 km travelled.

As expected, the team FRA1 continued with a very bold strategy and made their way to Lithuania. Their flight pattern so far is extremely impressive. Their game-changing decision was already taken over Lake Konstanz where they started to climb to the highest altitudes of all participating teams. The tracks shows this very clearly. After spending several hours above 5’500 metres, they managed to use a lower wind pattern with an optimum mix of speed and direction. They are now flying over Latvia and approaching Estonia.

One group of balloons may have been almost ignored by most of the viewers. Teams ESP and GER1 were travelling gently through Czech Republic and appeared to fly a totally different race. At times they were hundreds of kilometres behind the rest. Their very smart strategy only now unveils. The manoeuvres allowed them to move much more to the east than all the other teams. They flew unaffected by weather that some other teams encountered. Now, as they positioned themselves on the right centre-line for Lithuania, they climbed and continue on a great track.
Interestingly enough, their tracks will join the track that team SUI1 will take during today. Also team GER2 is now well positioned. When you analyse the live-tracking, one can see that the 4 balloons GER2, SUI01, ESP and GER1 are all soon aligned for their attempt to enter the flightpath into Lithuania.

This will be an exceptionally interesting battle of who best will manage to stay on track for this very small gap to the East of Kaliningrad on their way to Lithuania. Most probably this will decide for 2nd and 3rd place as FRA1 is in a very well position to win the race.

GBR1 and AUT2 are quite far to the west and might have to land in the morning.

This day will deliver the showdown and we will be able to watch a very interesting final to the Race.