Can a Gas Balloon fly forever?

To start with, one should have a closer look at a balloon and more precisely at its envelope.

At the top, we have an opening called parachute. By opening the parachute, we release gas in order to lose altitude or land. This parachute is kept shut on netless balloon by the pressure of the gas inside the envelope. It is the first risk of leakage of the gas. On net balloon the parachute (or valve) is much smaller and kept shut mechanically therefore more leak proof. 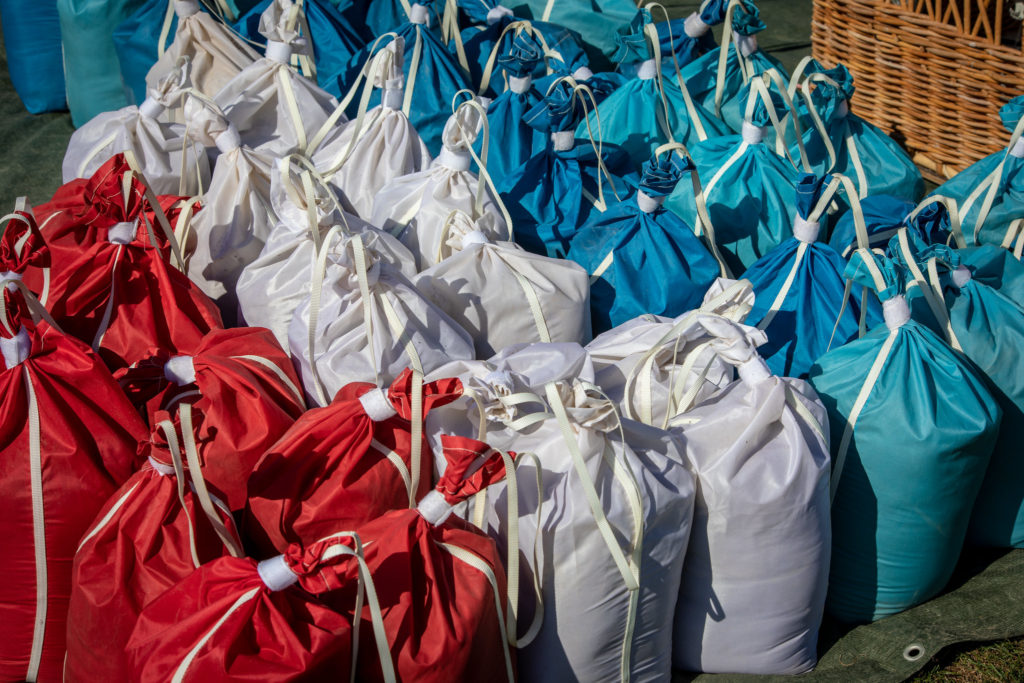 Sandbags ready for adding to the balloon

At the bottom we have an appendix hanging down, where excess gas can get out of  the balloon. This appendix must always be left open otherwise the balloon might get over pressurised and burst.

As the balloon takes off, it has its full load of gas and ballast. We will see how these munitions will be spent.

When the balloon is to be launched, at the start of the competition, in order to enable a very quick lift off and to clear the field as quickly as possible, the launch master will remove as much as 3 or 4 bags of sand. The pressure of the air on top of the balloon plus the fact that the balloon with altitude is meeting lighter air pressure than on the ground, the appendix will be open wide allowing the excess hydrogen to escape.

In 2011, the Coupe Aéronautique Gordon Bennett started from GAP in France, a small valley surrounded by high Mountainstowering over 3000 m. In the first hour of the competition, all competitors threw over board an average of 30 bags of sand (about 300 kgs). At dawn, next morning we only had 14 bags of ballast left.

In the first hours of the flight, while the balloon slowly gets its balance and that the pilot finds the altitude he is looking for, a fair amount of ballast and gas are being used in the process, and when the balloon is in equilibrium and at the right altitude no more ballast should be used.

After daybreak, as the sun heats the envelope, the gas inside will warm up and expand. Thus resulting in the balloon to climb and to loose hydrogen through the appendix.

Unless the team’s strategy requires the balloon to climb even higher or to come down, not much ballast will be used during the day.

At the end of the afternoon, as the sun goes down the gas inside the balloon loses its temperature and the balloon starts to descend. If one needs to keep the afternoon altitude, a few sand bags will be emptied overboard. If the balloon goes fairly low, one will see that it will no longer be as full as it was at the beginning of the flight.

If there is no technical problem, no restricted aera, no geographical obstacle, the flight will go on for at least 2 or 3 nights, the balloon loses gas and ballast, and both pilots will be getting tired. The most tiring phenomena to endure for the pilots is the change of temperature. At night, at altitude the thermometer can go as low as -20 degrees (especially if you are flying over mountains) and then, during the day in the sun, the temperature can reach 30 degrees or more. And beware of the sun as one can be burned pretty quickly at such altitude.

Pilots usually choose to land early morning when the wind is still calm or late in the afternoon after the heat convection. At the end of the flight, depending on the weather conditions the crew decides on how much ballast they need to land. If ballast is going short, extra food and water will be thrown away. Then, everything could go overboard….

Not so long ago, during the America Challenge, at the end of the flight a balloon was crossing the Saint Lawrence estuary when they ran out of ballast. Food was then thrown overboard, then the bed, then clothes, oxygen bottles, anything spare in the basket until they landed safely on the other side of the river.

The Coupe Aéronautique Gordon Bennett could be compared to an economy run. The better crews are the lighter ones. Everything taken on board must be as light as possible and absolutely useful. Every extra bag of sand counts. A bag of sand weighs 10 kgs, pilots go on a diet before the race, and losing as much as a bag of sand is a good achievement.